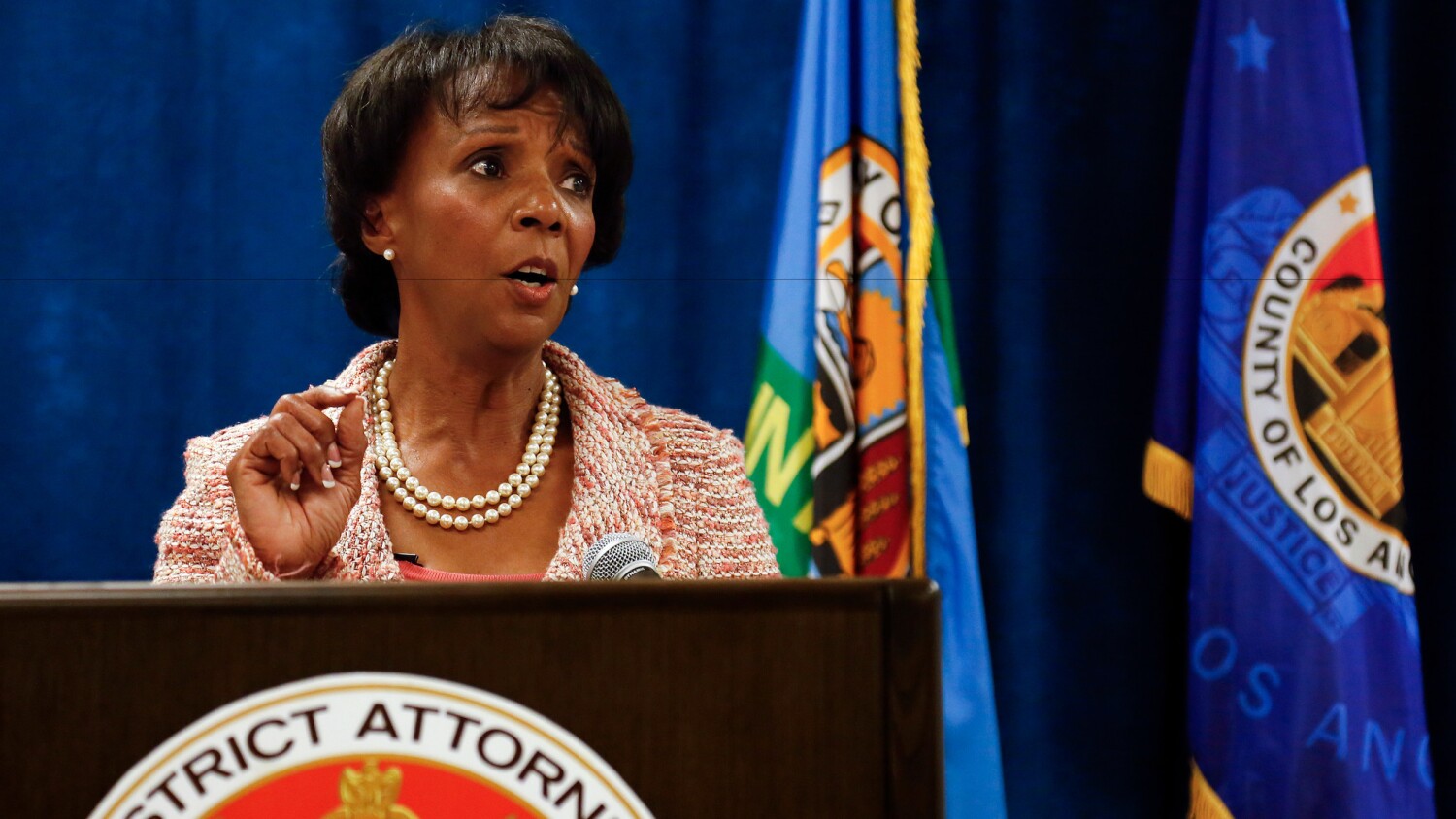 Los Angeles County Dist. Atty. Jackie Lacey’s campaign cut ties with a political fundraiser Friday after learning that it helped to organize an event this year aimed at boosting President Trump’s reelection campaign, marking a politically awkward moment for Lacey as she seeks Democratic endorsements in her own reelection bid.

Trey Kozacik of the Pluvious Group sent fundraising emails on behalf of the Lacey campaign, and his name appeared on a flier promoting a $1,500-per-person event at a downtown sushi restaurant in support of Lacey’s reelection bid held Thursday night.

In April, Kozacik was listed as a point of contact on an invitation to a fundraiser in Los Angeles for Trump’s reelection campaign, where donors could dine and snag a photograph with the president for $50,000.

Kozacik confirmed Friday that he had helped set up the Lacey fundraiser in downtown L.A. this week, but declined to comment further.

In a statement, Lacey said her campaign had been unaware of Kozacik’s work with the Trump campaign, adding that neither he nor the Pluvious Group will be involved in her future fundraising activities.

“I am the first Democrat in nearly 20 years to hold this office and the only major candidate in this race who is a lifelong Democrat. Mr. Kozacik has not been paid by our campaign,” Lacey’s statement read.

She also noted that the campaign’s chief fundraising firm, Daily Consulting, has previously worked with Hillary Clinton, L.A. Mayor Eric Garcetti and the Democratic National Committee. Thursday’s fundraiser was the only Lacey campaign event Kozacik had a role in, according to Lacey’s statement.

The district attorney’s race is nonpartisan, but Lacey has spent the early part of her reelection bid trying to present her credentials as a Democrat while fending off a trio of challengers branding themselves as progressive alternatives. Political observers said the appearance of any connection to Trump, however minuscule, will likely prove problematic for Lacey.

“Does it help weave a narrative against her as someone who’s not a progressive? Yeah,” said Eric Hacopian, a political consultant with EDH & Associates. “Especially given that all of her challengers are coming from the left.”

Though she enjoys broad support among law enforcement and has earned the endorsement of a number of high-profile politicians including Garcetti, Rep. Adam B. Schiff (D-Burbank) and Sen. Dianne Feinstein (D-Calif.), Lacey is at risk of being knocked over by a wave that has seen criminal justice reform candidates score upset victories in other district attorney’s races in Philadelphia and San Francisco in recent years.

While Lacey has positioned herself as forward-thinking on issues such as expunging marijuana convictions and the handling of mentally ill defendants in recent months, she is often seen as too deferential to police in use-of-force cases and has been criticized about incarceration rates in the county.

She is being challenged by former San Francisco Dist. Atty. George Gascon, a former high-ranking LAPD official who is seen as one of the most progressive prosecutors in the U.S., as well as public defender Rachel Rossi and Deputy Dist. Atty. Richard Ceballos. All three have carved out policy platforms promising reforms that aim to reduce incarceration and eliminate racial inequities.

Gascon’s campaign wasted little time blasting Lacey for her association with a fundraiser for Trump, calling it “extremely troubling” in a statement Saturday morning.

“While D.A. Lacey has been drinking from the same faucet as Donald Trump, she’s been pleading with democratic party delegates for their support,” the statement read. “You are who you surround yourself with.”

In addition to Kozacik’s role in the Trump fundraiser, the Pluvious Group has also been linked to questionable campaign finance practices in the past. In 2016, the California Fair Political Practices Commission fined former Republican state Sen.Tony Strickland $40,000 after he was accused of illegally funneling money into the coffers of a failed campaign for the state controller’s office, according to a report in the Sacramento Bee. The Pluvious Group handled fundraising for Strickland during that 2010 campaign, records show.

Political observers also said the link to a pro-Trump operative will not bode well for Lacey as she heads into endorsement interviews with the L.A. County Democratic Party this weekend. The party is expected to announce an endorsement in the district attorney race next week.

0
But on the newly returned “Tonight Show” Monday, Yankovic did perform a number that’s “sort of about social distancing, kinda topical,” he said.Host...
Read more
News

Gap, Kohl’s, Macy’s to furlough workers due to coronavirus downturn

0
A pandemic of the novel coronavirus has claimed the lives of more than 36,900 people across the globe. The new respiratory virus, which causes...
Read more
News

0
Hillsborough Sheriff Chad Chronister said in a news conference Monday that he was negotiating with the attorney of pastor Rodney Howard-Browne to turn...
Read more