‘I Sense a Revolution’: Anti-Apartheid Hero Biko Would ‘Not Approve’ of Zuma 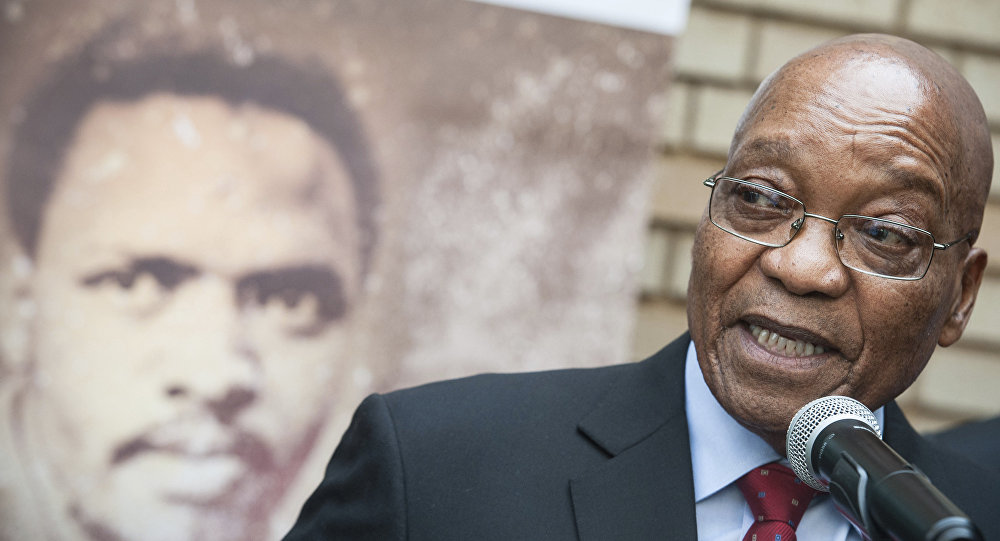 Forty years ago anti-apartheid activist Steve Biko died in police custody in South Africa. President Jacob Zuma appeared to liken himself to the dead hero on Tuesday but what would Biko think of the country if he were alive today?

Zwelethu Lungelo, 31, a musician and educator from Northern Cape province, said Biko would not approve of South Africa under President Zuma.

“He wouldn’t approve. I don’t think he would have liked it… he would definitely not like the current situation, because he was a person who was ‘for the people and by the people’ and today’s politics is no longer like that’,” Mr. Lungelo told Sputnik.

On the 40th anniversary of the death of anti-apartheid activist Steve Biko, South Africa’s President Jacob Zuma has likened himself to the dead hero, who died at the Pretoria Central Prison after being beaten by white police officers in 1977.

President Zuma, who turned 75 earlier this year, has faced mounting protests over allegations of corruption by him and his African National Congress (ANC) government.

“Jacob Zuma has avoided court for eight or nine years now. He has got over 700 charges against him and now there are other things about the Gupta family so it just shows corruption everywhere. Even people in the ANC are disgusted by him but they can’t leave because even if they do they would be cut off. I am definitely sure Biko wouldn’t approve,” said Mr. Lungelo.

The president commemorated the anniversary on Tuesday, September 12, by laying a wreath in a cell at the Kgosi Mampuru Correctional Center, where Biko was once held.

“We are still there some of us, hated as he was hated. At least he was hated and killed — it’s better with us we’re still hated and with words,” said President Zuma.

His comments were immediately criticized on Twitter by South Africans who were appalled that he seemed to be equating his unpopularity with Biko’s fate.

So who exactly is Jacob Zuma like, Jesus Christ or Steve Biko or he’s suffering from Multiple Personality Disorder (MPD)?

“The vast majority are ignorant to a lot of things but the good thing is that social media and other platforms are opening up for people to see that things are not as good as they thought they were. When you talk to the younger people, they feel that as soon as this generation — who were there in apartheid — pass on, there will be a fresh change,” he told Sputnik.

“I sense a revolution in this country,” Mr. Lungelo told Sputnik.

Biko was a black consciousness activist who was arrested on September 6, 1977 when he broke an order from the apartheid regime banning him from traveling to Cape Town.

He was interrogated for 22 hours and beaten so badly that he suffered a massive brain haemorrhage and died 12 days later in a prison hospital.

Biko was the 21st person to die in a South African prison in 12 months but his case gained international prominence when a friend, white newspaper editor Donald Woods wrote a book about him, which was followed by a film, Cry Freedom, in which US actor Denzel Washington played Biko.

Nobody was ever convicted in connection with Biko’s death.

Who Is On Question Time Tonight?

US-Australia relationship: Promoting prosperity, security and stability over the next 100 years

0
The United States and Australia have had a remarkable first '100 Years of Mateship.' From fighting shoulder to shoulder in the Battle of...
Read more
Politics

Why So Many Black Voters Are Democrats, Even When They Aren’t Liberal