What ‘Hamilton’ on Disney+ and Trump teach us about America 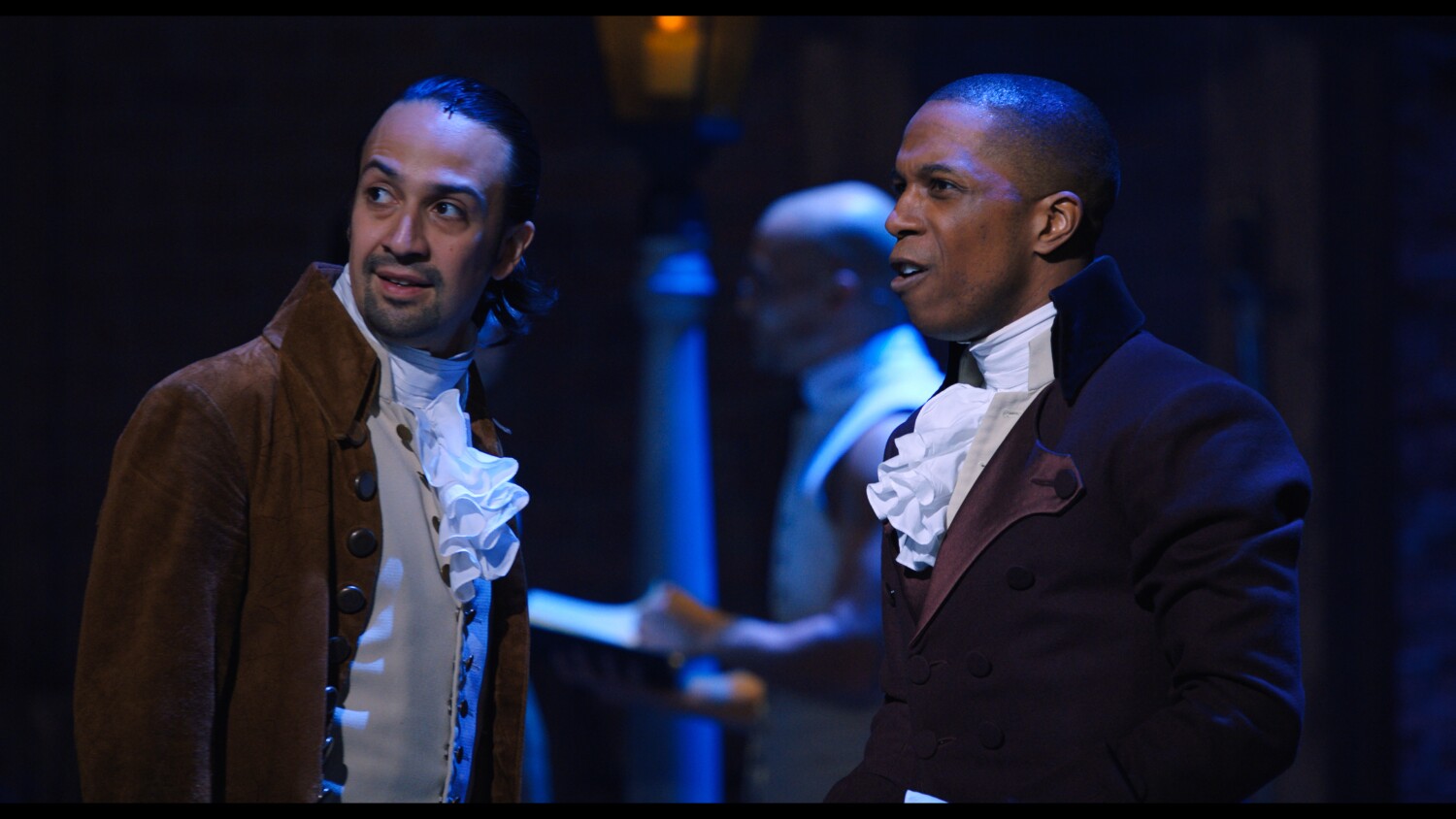 The nation’s stark divisions were dramatically thrown into relief this past holiday weekend. As Los Angeles turned itself into a pyrotechnic battlefield, the film premiere of “Hamilton” on Disney+ faced off against President Trump’s incendiary speech at Mt. Rushmore — two visions of America as fatally opposed as Alexander Hamilton and Aaron Burr.

Lin-Manuel Miranda’s hip-hop-infused musical about the Founding Fathers delivers America’s origin story with a diverse cast that makes good on those democratic ideals that from the inception left out whole swaths of the population. Trump’s performance outdoors in South Dakota, an angrier version of his “American carnage” inaugural address, inflamed conflicts, stoked grievances and poured kerosene on the culture wars.

As the coronavirus pandemic rages out of control in the U.S., Trump held an event at which masks were conspicuously and defiantly absent. He had no interest in calming the frayed nerves of a nation where more than 130,000 people have died from the virus and millions more have been infected.

Instead, he wanted to talk about statues. “Angry mobs are trying to tear down statues of our Founders, deface our most sacred memorials and unleash a wave of violent crime in our cities.” Unable to win reelection based on his handling of the pandemic or his stewardship of the cratering economy, he has decided that his surest path to victory is through a race war.

Which America do you want to live in, Miranda’s modern inclusive nation or Trump’s wrathful and nostalgic failed state?

Once the leader of the free world, the U.S. has become a pariah on the world stage. Europe has locked its doors to American visitors, unable to risk exposure to a nation that, despite the glories of its universities and the technical virtuosities of its industries, has renounced science for the sake of a demagogue’s ego.

On Sunday, the tragic news came that Nick Cordero, a charismatic Broadway star who had been at New York’s Cedars-Sinai hospital for months struggling with the coronavirus and its brutal aftermath, died. A handsome, strapping 41-year-old who reportedly had no known pre-conditions before falling ill, he was cut down in his prime by a virus that Trump insists is overblown, even as new U.S. infections are skyrocketing, intensive care units are filling up and our death toll is dwarfing that of every other affluent nation.

According to Trump, whose scientific credentials come by way of having an uncle who once taught at MIT, 99% of cases are “totally harmless.” This fraudulent statistic, conveyed in a speech at the White House to commemorate Independence Day, wasn’t supported by FDA Commissioner Stephen Hahn, who nevertheless was reluctant to openly criticize his thin-skinned boss when parrying questions on the Sunday political talk shows.

Speaking medical truth to would-be dictatorial power is a recipe for being silenced. On CBS’ “Face the Nation” on Sunday, host Margaret Brennan spelled the situation out for anyone wondering where’s Dr. Fauci: “We think it’s important for our viewers to hear from Dr. Anthony Fauci and the Centers for Disease Control. But we have not been able to get our requests for Dr. Fauci approved by the Trump administration in the last three months, and the CDC not at all. We will continue our efforts.”

Trump’s self-serving diagnosis of what’s ailing a suffering nation, however, has little to do with epidemiological data. Reelection is his only concern, as John Bolton makes clear in his book “The Room Where It Happened.” (The allusion to the title of one of the most electrifying numbers in “Hamilton” is purely coincidental, or so claims the hawkishly conservative author, who would never want to appear on the other side of the partisan divide.)

A gangbusters economy was supposed to be Trump’s ticket to four more years, but COVID-19 upended that dream and in the process exposed the widening inequality that now has the middle class waiting on mile-long food bank lines.

The arts sector has been decimated. A campaign on social media, #SaveTheArts, had arts professionals posting photos of themselves at their jobs to remind the world of the plight of actors, singers, stage managers, lighting designers, sound mixers, box office attendants and, yes, arts journalists.

British Prime Minister Boris Johnson announced a rescue package for cultural and heritage institutions on Sunday of approximately $2 billion. Meanwhile, furloughed employees at Los Angeles theaters have been privately messaging me in alarm about the prospect of Congress not passing another coronavirus relief bill.

For some of these workers, all that’s keeping hunger and homelessness at bay is Pandemic Unemployment Assistance, a provision in the federal CARES act that helps unemployed Californians who might not otherwise be eligible for Unemployment Insurance benefits. They have good reason to be terrified. Unlike in Europe, public support for the arts (never mind direct assistance to artists) has come only reluctantly and inadequately in the U.S. Until Trump is out of office, culture will have to get used to doing without.

“Hamilton,” the work of art that best epitomizes the Obama era, continues to offer a countervailing leadership voice. The musical doesn’t profess to have all the answers, but it isn’t frightened of the questions.

Some have critiqued the show for skirting the issue of slavery and making the Founding Fathers seem less implicated in the institution of white supremacy than they indeed were. If Trump didn’t see “Hamilton” as aligned with his enemies, he would reject this commentary about the show as part of the “left-wing cultural revolution,” determined to “erase our heritage” and “forget our pride and our great dignity.”

Miranda, however, welcomed the discussion on Twitter, calling the criticisms “valid.” As the author of a musical about the American revolution and the birth of our democratic government, he recognizes that history is a never-ending struggle, in which no one has a monopoly on the collective narrative.

Appreciate you so much, @brokeymcpoverty. All the criticisms are valid. The sheer tonnage of complexities & failings of these people I couldn’t get. Or wrestled with but cut. I took 6 years and fit as much as I could in a 2.5 hour musical. Did my best. It’s all fair game. https://t.co/mjhU8sXS1U

Miranda believes the struggle with our divisions can move us forward whereas the real estate mogul from Queens, determined not to lose his hardcore white base, is doubling down on those divisions by tweeting his loyalty to the Confederate South.

These visions squared off on Independence Day and will continue their battle until Election Day. Let the better America win.

Does A Man for All Seasons portray St. Thomas More accurately?

0
You’ve heard the saying. Now it’s time to hold it to the test. In anticipation of the next edition of The Other Art Fair...
Read more
Culture

Lovecraft Country is ‘ambitious and unwieldy’

0
Sexism figures in the story along with racism. Letitia is an oddity as an ambitious, independent woman. Even the villainous Christina is frustrated...
Read more
Culture

The Figurative Sculptures of Chie Shimizu

0
Carrying a mystical undercurrent, Chie Shimizu’s sculptures are rooted in an exploration of “the significance of human existence.”  The artist, born in Japan...
Read more